Child and Adolescent Behavioral Health (C&A) is glad that you chose to find some resources to learn more about the LGBTQ+ community and how to support those that you love who identify as part of this wonderful community.

“What is sexual orientation?” 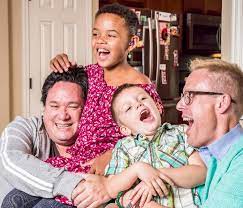 Sexual orientation is used to refer to the attraction that someone has to others. This can be physical, emotional, sexual, intellectual and/or spiritual. Knowing your sexual orientation can help you to identify with others whom you can

build fulfilling relationships with, platonic or otherwise. Later in this post, C&A will break down the meaning of “LGBTQ+” to help you better understand what these letters represent.

Gender identity and sexual orientation are not necessarily fixed, meaning that they may not remain the same throughout life. As people mature and learn more about themselves, they may realize that their gender identity or sexual orientation are different from what they originally thought. Self-discovery is a journey that does not happen overnight. By utilizing the information provided here, as well as seeking additional supports, parents can continue to be a supportive person in your child’s unique journey.

If parents suspect their child is struggling with sexual orientation, in most cases, therapists recommend it may be better to wait until the child is ready to come to them; however, it is important to provide an environment with which a child can feel comfortable in sharing their thoughts/feelings related to their sexual orientation. If your child initiates conversations about gender and sexual identities, it might be worth keeping in mind that the language used by LGBTQ+ allies is evolving and changing. The words can mean different things to different people. So, it is important to ask your loved one what they mean by certain terms and identities to best understand and support them. 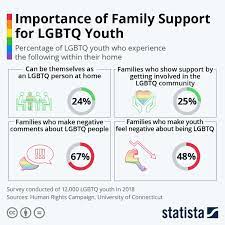 A trusted adulted for a child may include parents, teachers, coaches, mentors or other family members. To be that trusted adult and more inclusive of an LGBQT+ individual, it is important to understand some key words. One of those words is heteronormativity. Essentially, this refers to the norms in our culture that assume that individuals are in heterosexual relationships or are interested in this type of relationship (meaning a relationship between a man and a woman). Heteronormativity promotes the idea that heterosexuality is the preferred sexuality, when in fact there are many different types of relationships and sexual orientations that exist.

When adults function from a heteronormative society, we can make it difficult for individuals to want to express their sexual orientation for fear of rejection from loved ones or other important figures in their lives. For this reason, it is important to normalize that there are many different types of relationships. By doing so, we increase a student/child’s comfort in talking to trusted adults about their sexual orientation!

One way that adults can be inclusive when it comes to someone’s sexual orientation is to make small shifts in the types of language they use when discussing relationships. Examples of this language include:

Other ways that adults can be inclusive of the LGBTQ+ community is by talking positively about members of the community you have read about and/or have seen in television/movies. You can also display signs/symbols that show support for the community. This can help make children feel more comfortable in coming out to you. “Coming out” means that someone has made the decision to share their sexual orientation/gender identity with because you are a safe person to talk to. The most important thing to keep in mind is that the person who came out to you is still everything that you love about them and to be open to having conversations with them. It is also crucial to go into conversations with your loved one/student with an open mind and ears to give them opportunities to share their thoughts and feelings.

When a child shares information regarding their sexual orientation, which is oftentimes a surprise to loved ones, it is important for parents/trusted adults to learn to be an ally for the child. What does that mean? First and foremost, there is no one correct way to react to your loved one coming out to you. Learning about your child’s gender or sexual orientation can be confusing or uncomfortable for you, and these are valid and normal reactions to have! You are not alone in these reactions, and despite your discomfort your child needs your support. Some different ways that a person can become an ally are by supporting LGBTQ+ causes, listening to the stories of other LGBTQ+ individuals, standing against the discrimination of LGBTQ+ people, and by challenging your own biases and prejudices as well as those of others about the LGBTQ+ community.

Connecting with other parents with LGBTQ+ children, joining support groups, looking into resources for parents as well as youth can be additional ways in which you can learn more and connect with others in this journey. Of course, it is possible that you will still have some discomfort with these unfamiliar topics, but it is important to express these thoughts, and as much as possible, expressing these thoughts when you are away from your loved one. As more students come out and express their sexual orientation, learning environments need to provide safe environments and encourage allyship for LGBTQ+ children and help classmates support that environment.

Schools can help provide a safer environment for LGBTQ+ students and encourage allyship by setting school policies that oppose discriminatory words/actions against the LGBTQ+ community by both students and staff. Additionally, schools can develop a Gay-Straight Alliance (GSA) or other LGBTQ+ support group for students and allies. Finally, training staff members about LGBTQ+ terminology, as well as the helpful/unhelpful words and phrases can assist in making schools a safer environment for LGBTQ+ students.

What not to say to LBGTQ+ individual

Dr. Caitlyn Ryan conducted research as part of the Family Acceptance Project which found that LGBTQ+ youth who are not accepted by their families have higher risk for several mental and physical health issues. For example, these youth are:

However, before you are alarmed, know that there are several ways to be supportive and mitigate these negative risk factors.

Some harmful words/phrases to avoid are:

Words hurt. Though they can’t physically hurt us, words can be mentally and emotionally damaging. They can break a person down and the effects can be long-lasting. As research has shown, this may lead to a decrease in self-esteem and self-worth and may increase symptoms of depression and anxiety or could lead to thoughts of self-harm and suicide. Aside from the phrases listed above, various slurs that are used to describe those in the LGBTQ+ community can be harmful and encourages others that it’s okay to use these words. Always try your best to lead with kindness, even when you may not fully understand a person’s identity.

It is true that actions speak louder than words and taking any—or all—of the steps above will help assure your child that they have your love and support no matter what. And if you find yourself at a loss for words? A simple hug can be the best response! What does LGBTQ+ stand for?

Throughout this post, the letters “LGBTQ” has been used along with a “+” at the end. You might have been asking yourself, “What does all of that mean?” Here is how the Human Rights Campaign defines some of these terms:

L = Lesbian – “A woman who is emotionally, romantically or sexually attracted to other women. Women and non-binary people may use this term to describe themselves.”

G = Gay – “A person who is emotionally, romantically or sexually attracted to members of the same gender. Men, women and non-binary people may use this term to describe themselves.”

B = Bisexual – “A person emotionally, romantically or sexually attracted to more than one sex, gender or gender identity though not necessarily simultaneously, in the same way or to the same degree.”

Queer - “A term people often use to express a spectrum of identities and orientations that are counter to the mainstream. Queer is often used as a catch-all to include many people, including those who do not identify as exclusively straight and/or folks who have non-binary or gender-expansive identities. This term was previously used as a slur but has been reclaimed by many parts of the LGBTQ+ movement.”

Questioning – “A term used to describe people who are in the process of exploring their sexual orientation or gender identity.”

“+” = The plus sign is used “to recognize the limitless sexual orientations and gender identities used by members of our community.”

But wait…what’s the “T”? The “T” stands for transgender. Transgender and will be outlined with other information about gender identity and gender expression in the second part of this series to be published later in June.

For a list of additional sexual orientations/gender identities, as well as other LGBTQ+ terminology, check out: Glossary of Terms - Human Rights Campaign (hrc.org).

Note: This is not an exhaustive list and there are additional ways that people identify their sexual orientation.

Resources for the LGBTQ+ community

If you child is struggling with a same sex relationship or struggling with sexual identification, please reach out to Child and Adolescent Behavioral Health at 330.433.6075.

This is the first of a two-part series on how to learn and support the LGBTQ+ community. The author of this blog is C&A’s Joseph Fisher, LPC, who is a school-based therapist for the past four years. C&A’s expert Trauma Specialist Mary Kreitz, LPC, CDCA, who has 20 years of clinical experience in the field, and C&A doctoral intern Sushmitha Mohan contributed to this post.